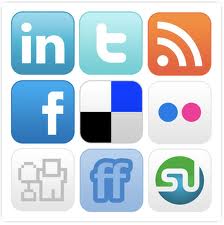 Be honest – how many landlords have ever even thought about it?

It could be a great additional tool to supplement a light credit file or for applicants that can’t prove their claimed income.

We’ve been reading up on this subject and there seems to be growing evidence that social media will eventually be used to gauge a borrower’s credit worthiness.

Already a microlending startup company in Hong Kong called Lenddo, is bragging they are, “the first credit scoring service that uses your online social network to assess credit.”  Their whole lending premise is based on how a borrower’s social media connections can be used to predict the likelihood of the borrower repaying their debts.

Sounds very promising as common sense predicts, “bird of a feather, flock together”.  Meaning that someone who hangs around with too many deadbeats, is highly likely to either be one themselves or will soon end up being one.

A “Big Brother” note of caution – the Lenddo site warns: “Failure to repay will negatively impact your Lenddo score, as well as the score of your Lenddo friends. Lenddo MAINTAINS THE RIGHT TO NOTIFY YOUR FRIENDS, FAMILY AND COMMUNITY if the borrower fails to repay, however, this is only done after several notifications to the borrower and an attempt to work out a payment plan.”

Several companies are working on developing social media profiles that can be used by banks to solicit the friends of profitable clients.  It’s not hard to imagine them tweaking this same info to supplement their credit making decisions.

So landlords, get with the 21st century and start playing around with using social media as another tool to evaluate applicants for your rentals!  Maybe the best way to start would be to use social media to research those you had to evict recently.  You might find something useful you can leverage to reduce future problem tenants and evictions.