The Real State of Real Estate…

The Real State of Real Estate… 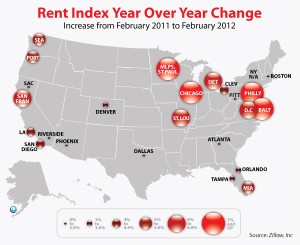 If you’re involved with the residential rental market, you’ve probably already heard that rental rates have been going up the last couple of years.  The dramatic increase in foreclosures has left a lot of families looking for a home that’s not an apartment, leading to increased demand, which has led to increases in prices.

Most of the numbers published to support the rise in rents are national numbers.  As we’ve all learned many times here in Michigan, our housing market really doesn’t follow the national trends.

So with that mind, we thought we’d analyze some local MLS data to see what’s happening in the Metro Detroit area.

We aggregated the data for the cities of Berkley, Clawson, Huntington Woods, Pleasant Ridge & Royal Oak, as they are in fairly close proximity geographically and demographically.

What’s all this mean?  Well, the traditional rental model has become distorted due to the recent surge in foreclosures.  Traditionally there wasn’t a lot of demand for 4-5 bed

rental homes.  People that needed that many bedrooms typically had families and bought a home.  Demand was low and supply correspondingly also low.  Now though, due to so many families losing their homes to foreclosure, demand has shot up for these homes.  The data shows that supply really hasn’t kept pace with demand, so basic economics has led to increasing prices.  While demand has gone up for these homes, they are not in high demand as most families can get by with a 3 bed home.  So, they are taking longer to rent.

If you’d like more data and/or the actual numbers behind the data, please email us!