The New American Dream Looks Good for the Rental Market

The New American Dream Looks Good for the Rental Market

For A Lot of Millennials, The Great Recession Was The ‘American Wake Up.’ 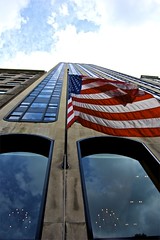 …and probably a few other things that got lost in the chaos of a World War, Korea, and Vietnam. But the newest take on the American Dream is as startling and different as the idea of a long-term career with the same company must have been to someone who mowed lawns all the way through the Great Depression.

It’s the Millennial take on the Dream, and it’s all about day-to-day control of your time and energy. According to a poll from MassMutual, a massive 38% of Millennials say that the ability to travel is an important part of their American Dream (compared to only 28% that believe ‘being able to retire securely’ ranks.) Similarly, more Millennials than any other generation — 26% vs. 16% of baby boomers — say that “self-employment” is a goal that forms part of their vision of the American Dream. Surely that’s a massive break from the ‘long-term career’ goal of the previous generation.

This makes a lot of sense from their perspective — after all, these are the kids who saw the foreclosure crisis rip the heart out of the housing market, and many of their parents had to sell homes at a loss. These are the kids whose parents saved up to send them to college and are now forced to take jobs that a high-schooler could do because there just aren’t any other jobs available. Why would they respect their employers when their employers clearly don’t respect them?

For those of us in the rental market, suffice it to say that this is good news. We’re looking at a generation that sees home ownership as a risk rather than a source of security — a generation that prizes the ability to move across the country on a whim rather than the privilege of living in one place for decades on end. Granted, the whole ‘self-employment’ thing may be a bit risky in terms of being able to pay rent every month with certainty, but that’s a relatively minor thing compared to the benefits of the new American Dream.

So how can we take advantage? By giving the Millennials the things they want from a business transaction: simplicity, convenience, options, and support. Many property managers will find this mildly absurd, but we’re serious on this one: if you set up a PayPal account and allow your renters to pay you via PayPal, you’ll find that a significant percentage of them will take you up on it, and they’ll trip over themselves to thank you for making it so easy on them. Yes, you lose some 2.9% on each transaction, but it may well be worth it for the regularity — and you can list it as a selling point on your advertisements. It will attract Millennials’ attention.

Similarly, going with one of the vendors offering subscription-based property management services in the “cloud” with tenant portals  — will be attractive to younger, more connected renters. Be ready for texting and chatting as forms of communication. Get creative, ask yourself how you can support the ideals of self-employment and easy transactions, and show the Millennials that you’re willing to support their vision of the American Dream, and you’ll be filling your vacancies with mobile young Dreamers before you know it.