The other shoe is waiting…except it’s several thousand shoes. 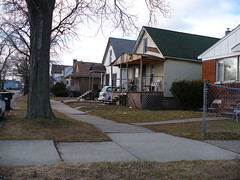 Detroit mayor Mike Duggan recently unveiled his State of the City address, in which he revealed (among many other things). The city will be resuming its suspended policy of tearing down large swaths of abandoned, empty homes. The plan is to demolish some 10,000 homes over the next two years. This plan is the first part of the hidden problem in Detroit’s rental market.

The second part of the problem is the seemingly-unrelated news a few months ago. The mayor announced the Detroit Building Department will be requiring landlords to obtain Certificates of Compliance. This requirement has been around for quite some time, but the city has never really enforced it – until now. The city expects landlords to register their rentals with the Building Department. This is for both a compliance inspection and a costly lead-based paint assessment inspection. Without a Compliance Certificate, landlords will be breaking the law if they rent out a home.

There’s no really delicate way to say this, so we’ll skip the political correctness and just say it. The problem is poor people. Specifically, there are thousands of extremely poor folks in Detroit that are currently squatting in abandoned homes. Thousands more slightly-less-poor folks are paying very low rent. They’re living in extremely poor conditions in homes that would never pass a rental inspection.

Now let’s assume a landlord of one of these homes follows the city’s rules and has it inspected. Let’s assume that the list of required repairs the city sends will cost them $10,000 to complete. On top of that they spend another $8.000 putting in new windows and other repairs to meet the lead-based paint abatement requirements.

If it’s not intuitively obvious, the landlord is next going to do two things – 1) raise the rent and 2) raise the qualifying requirements just to rent their home. So where are all the current tenants, willing to endure poor living conditions in the name of lower rent, going to live if the city forces landlords to fix up their properties? We believe the sheer number of very-low-income people that will be affected by these policies is going to become a huge problem in its own right.

Unfortunately, there aren’t really any good solutions in sight. Forcing landlords to renovate and maintain their rental homes will force rents higher than thousands of families can afford. On the other hand, many will argue that it’s a necessary step to take in terms of overall tenant safety and to continue boosting Detroit’s property values.

There is one interesting trend we’re also watching that may eventually impact all this. There have been several cases in other states where landlords have successfully sued cities over rental inspections. They’ve been able to win under the argument that mandatory city inspections are a violation of tenant’s rights to the peaceful enjoyment of their home as well as an infringement of the landlord’s economic rights. What would happen if a landlord or group of landlords brought such a case against the City of Detroit is anyone’s guess, but would definitely worth following..

One thought on “The Hidden Problem in Detroit’s Rental Market”