We’re exploring the difference between how old someone is and which generation they were born into. 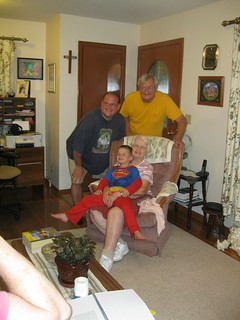 In Part 1, we talked a bit about how it’s possible to ‘target’ a rental ad to one of the three major age groups (18-35/36-65/65+) by emphasizing different values for yourself and your home. Today, we’re going to talk about how to target the audience based on the major events that sculpted their worldviews.

Marketing to Millennials (which the broadest age-range estimates tell us includes anyone born between 1976 and 2004, making them currently anywhere between 13 and 41 years old) is a matter of understanding the dual stories of the Great Recession (and the subsequent failure of the American Dream for anyone young enough to be a workplace novice at the time), and the rise of the Internet (and the subsequent availability of titanic amounts of information and communication). Millennials are:
• Mobility-oriented, meaning they value the ability to communicate and transact instantly and asynchronously from personal electronic devices.
• Deeply suspicious of being over-sold — “too good to be true” isn’t just a motto for them, it’s seared onto their consciousness. (As a side-effect, they put almost no value in paid endorsements or “expert” testimonials.)
• Obsessed about openness and transparency. They understand that even a good business gets bad reviews — they just want to see you deal with those bad reviews honestly and in front of the crowd, not behind closed doors.

To target Millennials, be humble but accurate in describing yourself and your property, and be willing to enable their penchant for mobile transactions by using a platform that will let them pay rent and put in work order requests online and asynchronously.

Marketing to GenX (a smaller generation that includes people born roughly between 1959 and 1981 — yes, there’s deliberately some overlap in these categories — making them between 36 and 58 today) means recognizing the main story of the 1970s and 1980s: that you and you alone are responsible for your happiness and success in life. The story of GenX is the rise of the two-income household (and thus a lack of direct parental supervision), and the commodification of ideas (exemplified by the rise of MTV, turning songs directly into products and skipping the whole physical tape/CD medium) with its associated developments in Intellectual Property law. Gen-Xers are:
• The most libertarian generation in that they tend strongly toward socially liberal but economically conservative thinking. As such. Gen-Xers love businesses they see as being pro-Earth, pro-human, and pro-worker, even if they’re also blatantly pro-profit. (Think Toms Shoes with their “one-for-one” gimmick.)
• Scrambling for security. The Great Recession hit these guys right as they were getting into their financial stride, and it knocked most of them for a big loop. Being able to offer them something they can depend on is a big plus.
• Always on the lookout for empowerment. Giving them tools that they can use to improve their own circumstances is what they love most — more even than just having their circumstances improved directly, because after all, don’t they know what they need?

To target GenX, market yourself as a successful entrepreneur, particularly if you can throw in some struggle-against-the-odds in the mix, and market your properties as places that are empowering (“minutes from the five biggest employers in Detroit!”) and safe (“low-crime neighborhood, comes with complimentary home security monitoring”).

Marketing to the Baby Boomers (including folks born between 1946 and 1964, making them between 53 and 71 today) means harkening back on one hand to the white-picket-fence, “two cats in the yard” dreams of the post-WWII era and the widespread education provided by the GI bill — and on the other hand to the huge counterculture that was exemplified by Woodstock: massive country-wide protests of war, sexual repression, and hate of all kinds. Baby boomers were weaned on the American Dream of being able to accomplish anything, and they damn sure tried. Boomers are:
• Competitive and achievement-oriented. Boomers love to have something they can point at and say they did better. They are highly motivated by prestige and acknowledgement.
• Happy to ask the most painful questions and leverage the most direct criticisms. Baby Boomers were the reformers who challenged the status quo and won, and they do it just as easily in their personal lives as they did on a political scale.
• Self-actualized. Boomers grew up in the Golden Era of massive middle-class affluence, and they brought in enough cash that they could afford to spend time and energy genuinely expressing themselves — which they grew to love!

To target the Baby Boomers, market yourself as a straight shooter with a firm handshake and a glint in his eye that is willing and able to answer their challenges and criticisms head-on, without deflecting or pooh-poohing them. Market those aspects of your properties that will help them feel superior to their neighbors, and/or will make them feel like they can express their inner selves freely.

Marketing to the Silent Generation (anyone born before 1951 or over 66 years of age) is a matter of understanding two not-often-discussed facts: first, the effects of the Great Recession were felt through the middle class all the way up until the end of World War II, and second, every major cultural narrative of the time was “us vs. them,” whether it was Blacks vs. Whites, Hitler vs. Everyone, or Superman vs. Lex Luthor. The Silent are:
• Big on loyalty and community. They easily identify themselves with the groups they’re a part of, even if those groups are on vastly different scales (i.e. being a part of a family, a neighborhood, a city, a region, a country, a department, a worksite, a company, a ship’s crew, a fleet, the Navy, their political party, their church, their denomination, their entire religion, and the whole world all at the same time.) They also value loyalty given to them and the implicit relationship that mutual loyalty creates.
• Firm in the belief that “you get what you earn and you earn what you get.” If you’re poor, you deserve to be poor because only your own choices and actions can make you poor. Same for being rich.
• Determined to save money, even when they have money to spare. There is no such thing as ‘disposable income’ except as necessary to maintain sanity.

To target the Silent Generation, market yourself as part of their in-group (this means finding out which of their many in-groups you might belong to and pushing that button), and as someone well-off enough to be confident that what you’re doing works. Market your properties as efficient, “no more than what you need,” and as being on discount.

So you might be asking, after those last two articles, what the difference is between marketing to age groups and marketing to generational demographics. The answer is that there isn’t any difference right now. But with every passing year, more and more Millennials pass through the invisible gateway to middle-age. If you understand what parts of their marketing profile exist because they’re Millennials and which parts exist because they’re still young, you won’t make the mistake of continuing to market to their youth as they’re moving into middle age and beyond.