Even People Who Move Don’t Go Far: The Importance of Local Reputation

Even People Who Move Don’t Go Far: The Importance of Local Reputation

We stumbled across a fascinating infographic by HomePropertyManagement.com recently, and it got us to thinking. According to the graphic linked above — and we’re pretty confident that HomePropertyManagment.com knows their stuff — more than 1 in 10 families have moved each year for the past few years. More than that, 64% of those who moved stayed in the same county (and only 2% who moved switched states.) 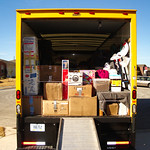 Multiply out, and you can see that somewhere around six and a half percent of all families will end the year somewhere very nearby, but not in the same place, that they are now. Some of those people will clearly no longer be renting — a full 5% of renters, according to the graphic, move because they’re tired of renting. But the rest of those people are in a select group we call ‘potential tenants.’ And we want to get them into one of our properties.

So, if 64% of the people who are moving are from your county and will stay in it, and another 34% of people moving into your county are from your state (with the last 2% being the aforementioned state-switchers), where do you think it pays to advertise, to build a reputation, and to be active in the community?

That’s right — it’s right in your own neighborhood.

Building A Strong Local Reputation
There’s really only three parts to building a strong local reputation — and contrary to what a bunch of Internet marketers might want you to believe, exactly zero of them involve a search engine.

The first step is to be damn good at what you do. This isn’t easy for anyone ever, but people that are serious about their business do it anyway. Communicate openly with your clients and your tenants. Always do what you say you’re going to do (which means learning to not overcommit). Always do one thing more than you say you’re going to do. Look and act like a professional. And, obviously, bring a quality of service that no one in your price range can keep up with.

But that’s only part of the game. You also have to help other people accomplish their goals. That’s part of the difference between having a reputation as a great businessman and having a reputation as a great person. If you get a referral, approach that new person in a way that brings your A-game, not just for your own sake, but to make the person who gave that referral look competent and professional. Local reputation starts with individuals, and the more local, influential individuals you get on ‘Team You,’ the better your reputation. One more thing, be sure to update the person who sent you the referral on the outcome of heir referral to you – no matter if it was good or bad!

And there’s one more step: community outreach. Getting engaged with your community isn’t an act you perform once and then sit back; it’s an ongoing activity that requires regular donations of time. But when you can walk around your town and find your (or your business’) name on donated exhibits at the children’s museum, on a brick in the Rotary park’s sidewalk, on a bench on a busy downtown street corner, on the name of a local softball team, and on and on, you know that thousands of other people are seeing it as well — and that’s how you get people to think of you when they realize it’s time to move, but they don’t want to leave.