The FHA is much like the Wu Tang Clan — nothing to…ahem…mess with. 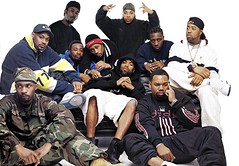 The Fair Housing Act (FHA) — 42 U.S.C. § 3604(c) — makes it illegal to:
make, print, or publish, or cause to be made, printed, or published any notice, statement, or advertisement, with respect to the sale or rental of a dwelling that indicates any preference, limitation, or discrimination based on race, color, religion, sex, handicap, familial status, or national origin, or an intention to make any such preference, limitation, or discrimination

Why is this important? Because it’s one of the single most wide-reaching limitations on free speech anywhere in the Federal lawbooks. Read carefully: this paragraph applies to anything you communicate with the respect to selling or renting a house, but far more critically it applies if those communications “indicate [a] preference…or an intention to make [a] preference.”

That means that the law doesn’t apply based on your intent — it applies based on how the person receiving the communication interprets your statement. Technically speaking, the courts have interpreted this to mean that an “ordinary person” would reasonably interpret the statement as being preferential. Furthermore, the courts have gone out of their way to specify that said “ordinary person” is quite capable of sniffing out subtle indications of preference. From the case Ragin vs. New York Times Co.:
Ordinary readers may reasonably infer a racial message from advertisements that are more subtle than the hypothetical swastika or burning cross, and we read the word “preference” to describe any ad that would discourage an ordinary reader of a particular race from answering it.

Obviously, the same logic applies to all protected attributes under the FHA, not just racial ones.

But that’s not all! The FHA also applies to purely graphical aspects of your ad, including any live humans, symbols, or décor appearing in your ad’s pictures. In short, if you have a picture that in any way implies that the home is directly related to a protected group (i.e. is in a primarily-black neighborhood, or is being offered by an Irishman, or is not considered child-ready), you’ll fall victim to this clause of the FHA as well.

The One Exemption a DIY Landlord May Not Know

One significant exemption exists that a DIY landlord might be able to take advantage of. The Shared-Living-Areas Exemption says that if a rental isn’t a completely-independent living space, and requires that some living space be shared with another individual (i.e. renting out a room, or a dormitory-like setup with a shared kitchen), you are allowed to specify that only people of a given gender may rent.

The One Exemption a DIY Landlord May Not Correctly Understand

Some DIY landlords are what the law calls “Mrs. Murphy”-type landlords — they live in one of the units of a small multiplex (legally four or fewer units), and they rent out the units they don’t live in. These landlords are allowed to discriminate in whom they accept as tenants based on the protected factors above due to their position as neighbor as well as landlord.

BUT! They are not allowed to discriminate in their communications about who they rent to. Even Mrs. Murphy has to write advertisements and talk as though they are open to renting to absolutely anyone. They are simply immune to being sued for actually rejecting a tenant based on a protected attribute. It’s important to note that the ban on communications includes even asking a tenant about a protected attribute — so Mrs. Murphy is allowed to discriminate, but only if she can discern the attribute she’s discriminating against on her own, without asking.