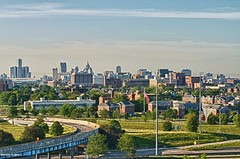 In many of the real estate markets in big cities across the country, walkability is a crucial factor in the urban core. If you can’t get to your grocer, pharmacist, and a few hangouts without driving, that apartment in downtown Seattle or Minneapolis or Atlanta is going to suck. But generally speaking, once you get out of the downtown area, that phenomenon fades away. People who live in the urban sprawl (much less the suburban sprawl) expect to have to drive to Trader Joe’s and Target. Detroit, however, proves the uniqueness of its economic blight once again by greatly appreciating walkability well out into the sprawl.

The Dearth of Cars in Auto City
Simply put, there are (shrinking, but still sizable) swaths of the urban sprawl within Detroit city limits that are poor enough that the inhabitants may or may not own a car. Even the ones that do often can’t afford to spend the money on gas every time they need to pick up their prescriptions or grab some milk. The irony escapes no one.

The people in these neighborhoods walk or take a city bus nearly everywhere they need to go. Many of them work in the ‘grey market,’ finding jobs under the table providing services for neighbors or folks they connect with online, so they don’t have regularly-scheduled jobs they need to drive to. So the ability to walk — yeah, that’s where walkability comes from — to the most vital amenities becomes a massive selling point.

And while absolutely no one studies things like ‘prescription deserts’ or ‘entertainment deserts,’ the same logic absolutely applies. If your rental property is within a 15-minute walk of a grocer, a pharmacy, a park, and at least one restaurant/bar/nightclub/theater, you’ve got genuine walkability in Detroit terms — and that’s worth putting in your rental ads.

Side Effects of Note
The focus on car-free living has several notable side effects on the Detroit rental market. We kind of skimmed across the idea of the Internet and its effect above. It’s worthy of note that the Internet has a second significant impact on the car-free urban sprawl: the power of delivery.

Many times, it’s worth the extra few dollars in shipping costs for someone in the sprawl to order a bottle of Pledge or whatever online and have it shipped to their door than it is to go get some from a store that’s a mile and a half walk away. This in turn means that shipping lockers, of all things, can make a uniquely attractive and relatively inexpensive feature to add to a multi-family property in the urban outskirts of Detroit.

Though bicycles aren’t particularly popular in the city, there is definitely a portion of the population that has learned to depend on them when their feet won’t suffice. For that reason, if you find that your rental property is in a food (or any other kind of) desert, promoting your property’s lockable shed as a convenient place to store a bike is an option that may be worth exploring.

The number of various impacts that urban Detroit’s lack of automobile use has on the lifestyle there is hard to overstate. As a rental property owner, property manager, or DIY landlord, the important thing is that you understand that within the city, cars aren’t necessarily the norm, so walkability is clutch — so adapt your expectations to match.