We talk to LOTS of people. 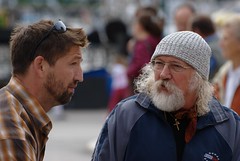 At Royal Rose Properties, we like to say that we have three different groups of clients: our owners, our tenants, and our contractors. What we mean by ‘clients’ is that when we find a good owner, tenant, or contractor, we want to invest in that relationship and treat them well — because we want them to stick around. The most important part of the ‘treat them well’ process is communication. Money problems can be worked around, but communication problems will straight up end the relationship.

But there’s a significant wrinkle there, because each group requires an entirely different kind of communication. Send a message created for a contractor to an owner, and you can cause yourself a mountain of headaches. Heck, format a message for an owner in the way that you’d format a message to a tenant, and you might have an issue. So learning to manage communications with each group is a necessity. Here are the three big problems that need to be managed.

The Problem of Explanations

We wrote a post a while back about how property managers have to translate between the languages of various groups. But there’s more to being in the middle between such diverse groups than just translating: we also have to explain each group to the other. That might not sound like much, but the catch is a big one: explaining an owner to a contractor in the contractor’s language can come across as something quite offensive to the owner.

For example, imagine a contractor wants to know why they have to go back and repaint a room that they just painted a couple of weeks ago, and the owner’s explanation is “I assumed you would repaint it in the same neutral tones as the rest of the house instead of in the existing periwinkle.” It is absolutely part of your job to not tell the contractor about that bad assumption, because you’re going to make the contractor think that the owner is dumb. It’s your job to tell the contractor something more along the lines of “We believe that a neutral tone will get a tenant into the home faster than the existing periwinkle.”

Because that is exactly why the owner assumed it would be painted in neutral tones in the first place, so it’s not a lie. It just leaves out the assumption, and in fact removes the owner from the equation altogether by making her part of the collective ‘we.’ Those small changes are what enables two groups with differing agendas, experiences, and needs to work together — and it’s up to the property manager to be the grease that keeps the cogs from grinding to a halt.

The Problem of Targeting

The biggest reason why communication management is a skill that every member of a property management firm has to learn? Targeting. If your communications accidentally reach someone they’re not intended for, trouble — even including lawsuits! — can come knocking. For example, here’s a (fictional!) communication that might potentially have shown up in our Conversation Log in (our Property Management platform of choice) PropertyWare:

This is an entirely accurate summary of what (fictionally) happened…but not one you would ever want the owner or the contractor in question to see. In our case specifically, PropertyWare has a little drop-down box that allows us to choose which group can see any given entry in the Conversation Log…but it defaults to ‘Owner.’ You can imagine the potential for problems if the team isn’t extremely well-trained in how to keep their communications targeted correctly. Don’t ask us how we know.

The Problem of Being Circumnavigated

One of our ‘unwritten rules’ — which we should probably write down, admittedly — is that our workers never, ever give an owner or a contractor’s contact information to a tenant, an owner, or a contractor. Why? Because problems happen when these groups communicate directly with one another.

Imagine, for example, if a particularly high-need tenant gets ahold of an owner’s phone number. Instead of calling you when there needs to be a repair, they call her. The owner, an investor who has never had to deal with repairs because she hired a property manager right off the bat, gets annoyed by the twice-weekly calls and assumes it’s because you’re not doing your job. You know nothing about the problem until suddenly you get a call from an irate owner threatening to move to a different manager despite not having done anything wrong or even outside of the ordinary.

There are certainly (an infinite amount of) other things that can go wrong in the communications of a property management business — but getting these three big ones under control should be a top priority.