How to Deliver Bad News to Tenants (Without Losing Them)

How to Deliver Bad News to Tenants (Without Losing Them)

Why lose a tenant and cost yourself a bunch of time and money just because you’re not at the top of your game one day? 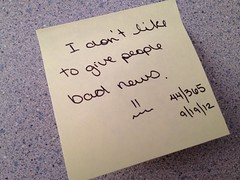 There’s no better way to lose a tenant than to hit them with bad news in a bad way. Never has a lease been broken faster than when a cranky landlord calls and tells a tenant, who’s just dumped all their money into fixing their car so they can get to work, that their rent is getting raised starting next month…on the 27th. Of course, there will always be people who are never happy, but that doesn’t mean you shouldn’t take the steps you can to notify your tenants as quickly and nicely as possible. And that means…
…Communicating Early,
The easiest way to lessen the impact of dramatic news is to share it with a tenant as far in advance as reaonable. That way, the news seems like it’s not really a problem (because it’s far away), and they have plenty of time to gear up for the change by the time it actually happens. It’s amazing how much less difficult it is to pay an extra $50/month if you know three months ahead of time that you’ll need it!

Of course, for smaller ‘bad’ news, you can be a bit less aggressive with your early announcements. For example, for a standard walk-in inspection or a maintenance visit, a week is generally plenty.

…Communicating Often,
The problem with telling a tenant about a rent increase three months early is that they won’t remember three months later when it goes into effect. So you should keep to a regular reminder schedule of telling your tenants about bad news. That way it’s more likely they will remember it.

The obvious exception is when you don’t know that something unfortunate is going to happen — in that case, it’s your responsibility as a good landlord to let the tenant know as soon as you do…and then remind them as needed. Also keep in mind that for some issues, legal matters mandate specific notice times. In those cases, of course, follow the law at the minimum, but consider being more generous with your communications than the law dictates.

…Communicating Along Multiple Channels
When news is important, don’t trust any one message to reach the tenant. Send them a notice in the mail, and via email, and call them, and for genuinely critical matters, leave a note on their door and text them as well. Any couple of messages can get lost from time to time, so don’t leave them that out: hit them up in every way you know how.

If you’re following the Early/Often plan above, you can generally stick to one channel for the 3-month notice, use a few and make sure you get a response for the 3-week message, and then do some effort into getting a live response (i.e. on the phone, in person, or via some other live channel like Skype) for the 3-day notice.

…Communicating You Are Documenting Your Notices
Many tenants seem to easily forget things you just discussed with them yesterday. You’ll never get them to remember anything, especially when it’s easier for them to claim you didn’t tell them AND they benefit from delay tactics.

Be sure to keep notes of all your communications! The best way is to email them, even emailing them a ‘confirmation email’ to document phone calls. Save screenshots of text messages you’ve sent.

…Communicating Clearly and Thoroughly.
Don’t sugar-coat, beat around the bush, or try to gloss over the bad news. Tell the client, in simple language that they will easily understand, exactly what is going to happen. And then, tell them why, again, in the most concise and effective language you can.

Get in the habit of doing all these things and you’ll have less communication issues with your tenants and hopefully better professional relationships with them.

Added bonus: all this documentation will also come in handy if you have to evict a tenant or run into any other legal issues with them.