Getting Tenants (Or Anyone Else) to Do What You Want, Pt. I

Getting Tenants (Or Anyone Else) to Do What You Want, Pt. I 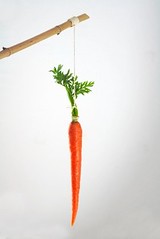 The common view of ‘how to modify someone else’s behavior’ in American culture is that it’s comprised of two basically equal parts: carrots (rewards for doing the right thing) and sticks (punishments for doing the wrong thing). That theory has several significant advantages – it’s easy to communicate, it’s easy to remember, and it’s relatively easy to put into practice. It also has a significant disadvantage, which is that it has been scientifically disproven many times over. The carrots/sticks reward system might work fine for a creature with no real cerebrum, but it just doesn’t actually describe how humans work.

The Problem
The initial problem with the carrots/sticks reward system is that it only motivates if the reward/punishment is immediately relevant or the action in question is stupidly easy. If you tell a tenant “We’ll give you $100 for referring another tenant,” that person is only going to look for someone to refer when they actually need that $100 to accomplish a goal that is meaningful to them. Or, they’ll refer someone to you if that person literally just walks up and says “Hey, I’m looking for a place to live, do you happen to know where I should be looking?” …and the tenant remembers that you’re offering $100.
The moment the goal becomes irrelevant, the $100 becomes irrelevant. And the same applies to sticks, but backwards – the moment the punishment becomes something they’re willing to absorb, they’ll do whatever the thing you’re trying to discourage without a second thought. That can happen because the punishment is deemed insignificant, but more damningly it can happen because the benefit (of making you mad!) is deemed worth the punishment.

The Bigger Problem
Even more damning to the carrots/sticks theory is the fact that humans are A) complicated, and B) observant. A human doesn’t just see the carrot and/or stick and think “Oh, I (don’t) want that, I’ll (not) do this!”. Humans base their decisions on a whole host of factors, and one of the biggest is “do I trust/like/respect the person on the other end of this interaction?”

So a human will look at your carrot and/or stick, but then they’ll look past it at you, and they’ll make that decision based on their perceptions of you as a person (and/or business). If they like/trust/respect you, they’ll usually (not) do what you (don’t) want them to – not because of the carrot or the stick, but just because of who you are.

Contrariwise, if they don’t think highly of you, then basically any attempt you make to motivate them in a certain direction is going to result in one of:
1. They just ignore you and do what they were going to do in the first place, and screw the consequences, or
2. If the consequences are harsh enough (like getting evicted), they’ll do what they have to do – the bare minimum and nothing more – but they’ll do it bitterly and they’ll look for any opportunity to get back at you later. (And note that this only works for sticks – if someone doesn’t trust you, there’s no promised reward big enough to get them to actively pursue a course of action they don’t want to take!)
3. If the reward is high enough, they still won’t make any effort to obtain it because they won’t trust you to actually give it to them.

Of course we’re not going to only talk about the problems with the current theory – but you’ll have to come back next time for the solutions.