People hate being sold to by the stereotype of the used car dealer. 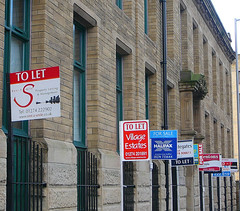 So you’ve got a property that’s ready to have someone move in. So how do you get someone to move in without spending a boatload of money marketing it? This is exactly what the Internet is good for! So today we’re going to talk about a few different theories on property ad construction, and then talk about how to get eyes on the ad you build without spending any cash to do it.

The Three Fundamentals of Modern Marketing

1. 100% of human decision-making is based on in-the-moment emotion, but backed up (or undercut!) by reasoning hours or days later. This means that your ad must create emotional pull — and if you’re not scheduling showing for “that afternoon,” it had better have some good logical backup in there, too.
2. Absolutely everyone alive hates ‘getting sold,’ but everyone loves to sell themselves on stuff. This means you should avoid advertising clichés, buzzwords, or other obvious signs of “I’m selling you something,” but give them every tool they need to firmly plant the hook in their own cheek.
3. The single worst thing you can do to a potential client is overpromise, then underdeliver.


These three fundamentals come together to make a simple rubric for modern rental marketing: ads need to talk in plain English, they need to provide both emotional and logical backup for the decision to rent, and they need to be accurate about the upsides of the house. (There’s extensive debate about whether or not it’s better to be accurate about the downsides, or just not mention them and let the tenants decide for themselves at the showing what the downsides are.)

A single-image type ad might be as simple as “Sip your latte and watch the sun rise over Lake St. Clair from the balcony of this expansive Grosse Pointe bungalow: 243-555-1234 for showings.”

The ‘everything’ type ad would use that as a headline, and then go on to describe each room in the house, the neighborhood the house is in (and amenities near it), the general aesthetic design of the house, and any specific benefits the house brings to the table from the garage down to the garbage disposal. You also absolutely need to include, at minimum, the:
• Beds & baths,
• Square footage,
• Number of floors (incl. basement),
• List of non-bed, non-bath rooms,
• Existence and type of garage

The first type of ad is obviously much faster to create, but because it doesn’t provide any logical backup for the emotional pull, it has a much higher “fail rate” – you may get more showings, but you’ll get fewer applications out of a shorter ad. Which system is preferable to you is going to depend on whether you excel more at writing or at showing.

Next time: the art of getting proper marketing pictures taken of your home…with your phone.