Accepting partial rent payments can mess up your plans in a big way. Don’t do it unless you know exactly what it means! 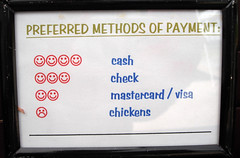 One of the most common situations inexperienced or just overloaded landlords find themselves loathing is discovering that something innocent or even kindhearted they’ve done for a tenant ends up putting them on the wrong side of the law. Not necessarily in the ‘now you’re a criminal’ way, but on the ‘now they have the advantage in court’ way. The classic example is accepting partial rent payments.

If the rent is due that day (and law in your state doesn’t put you in too horrible of a position), consider having a standardized contract ready. It should stipulate that you are accepting a specific amount of the rent, provide a due date for the remainder, and — this is critical — it should specify whether or not you’re going to charge a prorated portion of your standardized late fee on the late portion of the rent.

If the rent is late, you should almost never accept a partial payment. There are a number of reasons for this, not the least of which are simple bookkeeping (no fun having several tenants paying on several different says) and keeping tenants on the up-and-up (once a tenant pays late once, they’re much more likely to pay late again later).

State Laws and Partial Rent Payment
The number one reason to avoid partial rent payments after the due date is that, in many (most) states, accepting partial rent prevents you from enforcing any penalties your lease mentions. You can’t charge late fees, can’t proceed with an eviction — and in some states, you can’t even enforce your right to collect the remainder of the rent!

How to Not Be a Jerk About It
Many landlords (who actually like their tenants!) are asking themselves, “but how am I supposed to tell my (friend/uncle/long-time tenant/whatever) that I’m not going to be nice to them this time?” The answer is simple: you have a legal document that dictates the way each of you has to act toward each other. It’s called a lease, and it was written by a lawyer (right?!?) who wrote it to protect each of you from the other. You have to obey the terms of the lease, and the terms of the lease clearly say you cannot accept partial payment after the due date (right?!?).

What If They Just Leave Money Under Your Door?
If you don’t ‘accept’ a partial payment, but instead simply find a partial payment in your mail or the drop box outside of your office one day, you cannot simply ignore it or even simply return it. You must write a notice to your tenant that you aren’t accepting the partial payment, why not, and what will happen if full payment is not made within 24 hours. Then bring that notice to the tenant and have them read it in front of you. (Or if they’re not home, take a picture of yourself putting it in their mailbox or taping it to their front door.)

There are perfectly valid reasons for a tenant to be unable to pay rent, and for you as the landlord to work out an arrangement for dealing with that situation — but accepting partial payment without knowing exactly what the repercussions are going to be is not one of them.