Detroit isn’t even near the top! 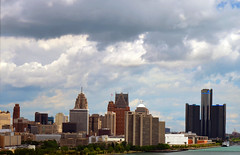 Nearly half of all renters in the U.S. are housing cost burdened, according to the Joint Center for Housing Studies at Harvard. But what does that mean?

The U.S. Department of Housing and Urban Development defines households spending more than 30% of their income on housing-related costs, such as or mortgage payments and utilities, as being housing cost burdened. And it makes sense: The more of your income you need to devote to housing, the less you have to afford food and other bills, much less build up a savings account to protect yourself against financial emergencies.

According to Heavy Housing Burden, a recent report by ABODO using data from the U.S. Census Bureau, about 52% of renters in Detroit fall into the cost-burdened category. And while that sounds like a high number, it’s not in the top 10 when it comes to cities with the most cost-burdened renters — in fact, it’s not even in the top 30. Of the 100 most-populous metropolitan statistical areas, Detroit-Warren-Dearborn — despite being one of the “poorest cities” in the country — comes in at #32.

At the top of the list, Miami-Fort Lauderdale-West Palm Beach has the highest percent of renters spending more than 30% of their income on rent in the country: nearly 64%. 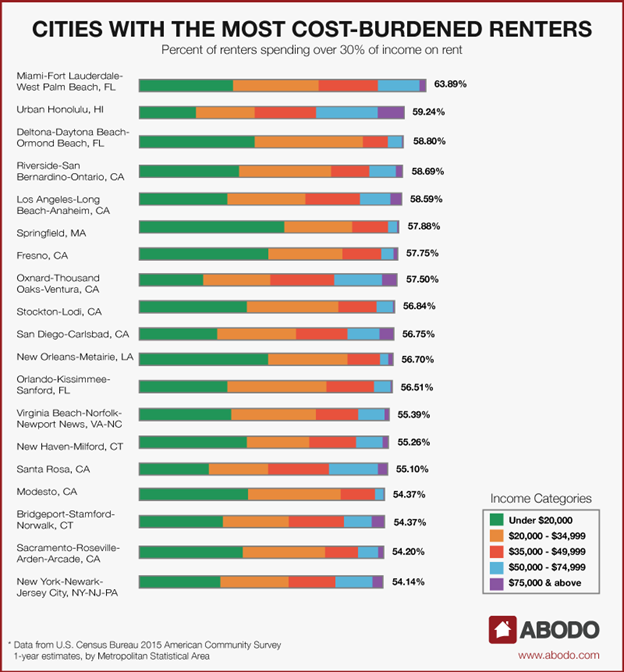 The incomes of the cost-burdened aren’t always what you’d expect, either. In Urban Honolulu, nearly a quarter of renters earning at least $75,000 per year are still spending at least 30% of that high income on rent. In Los Angeles, that drops to 11.3%, and drops further to 10.6% in Miami. In these cases, it’s difficult to say without a more extensive study whether these renters are simply living beyond their means, or if housing costs and availability have made it difficult for these renters to find more affordable options.

These are bleak numbers. Unfortunately, there are currently enough HUD subsidies to help only a fraction of these renters. In Miami, for example, subsidies — which are distributed based on household income compared with the area’s median income, not based on rent paid — could cover just 14.8% of cost-burdened renters.

Whether this signifies a governmental aid shortfall or a lack of financial literacy among renters is unclear, but housing affordability is nonetheless an increasingly important topic in a country with the number of renters steadily on the rise.

We’d like to thank Abodo.com for providing this insightful guest post this month! What follows are our own thoughts on the matter:

If we apply the 30% of income towards rent calculation to a tenant earning $20,000, they would only be able to afford monthly rent of $500 ($20000 / 12 x 0.3). Ignoring government subsidized housing, you won’t find many quality 3 bedroom rentals in the Detroit area for that amount of rent. $500 will get a tenant a decent 2 bedroom flat or apartment, but most of those will be in Detroit, not the suburbs.

For earnings of $34,000 the 30% translates to rent of $850. There are a lot of 3 bedroom home choices at this amount of rent in Detroit and many of the suburban cities that touch Detroit.

Obviously, these numbers show that the lower the income of a tenant, the more likely they are to be paying more than 30% of their income towards rent. Our applicants with income under $20,000 are usually getting government aid or have a roommate(s). Most have numerous collection accounts and terrible credit, so we try to focus on rental history and stability of income. Even then, most are not approved unless they have a Section 8 voucher.

You’d think tenants with income up to $34,000 would show a decent increase in their credit, but it’s not as much as you’d think.

So, why are so many of these tenants living paycheck-to-paycheck? We seem to be one of the few property managers that ask for a bank statement from applicants. What we see on those bank statements are a lot of fast food charges, beauty purchases and feel good buys. Instead of a savings pattern (or even a break-even pattern!) we see tenants trying to live the American Dream Lifestyle with every penny they make. Of course, we see the same thing with some tenants making over $100,000 – far fewer per capita, but still more than you would think. Money management just isn’t a common skill anymore; the better-off merely have fewer consequences for their poor spending habits.

In the end, landlords should understand the demographic profile of the tenants their rentals are most likely to attract. If you don’t want to look at credit reports with all sorts of collections and then deal with tenant excuses about why their rent is late, don’t buy rentals in areas where tenants are most likely to be paying more than 30% of their income towards their rent — and conversely, don’t expect to set your rents significantly above 30% of the average income of the area your home is in.