Tenants rarely take responsibility for repair issues, so landlords need strong language in lease agreements to legally charge tenants for problems they cause.

We just had another experience that reminded us why our lease has so many clauses.

A Tenant contacted us because their kitchen drain was clogged. We asked what caused the problem and it took awhile to get a response back from them. In the meantime, we scheduled a plumber to take care of the issue.

We received their response prior to the plumber arriving and the Tenant stated they had put potato peels down the garbage disposal, but thought they had run plenty of water to avoid any clogs. Obviously not!

Our plumber fixed the problem and sent us pictures of the potato peels that caused the clog. We sent the article, the language from our lease and the plumbers bill to the Tenant, explaining that they were responsible for this issue and would have to reimburse us for it.

This particular Tenant hasn’t given us any problem paying for the problem they caused, but it’s not always that easy. While we were waiting to hear back from the plumber, we Googled the internet for information on this problem. Sure enough, we found an expert article that made it clear, potato peels, rice and other starchy and fibrous foods should NOT be put down a garbage disposal.

We’ve observed a direct correlation between a Tenant’s income level and their willingness to pay for their mistakes. The lower the income, the less willing they are to pay for something. The logic is simple – the less you make, the tighter your budget and the less you have for unexpected bills. 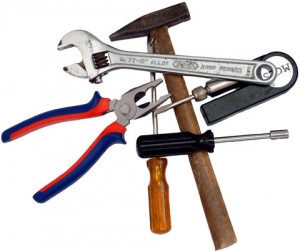 We once had a Tenant on Section 8 that admitted their child broke a door, but wanted us to fix it and not reimburse us for it. We immediately contacted their Section 8 counselor who required them to cover the damage or face losing their Section 8 voucher.

We’ve also found there are other types of tenants that feel “entitled” and don’t think they have to pay for anything. It’s very difficult to identify these types when screening them, but they soon show their true selves with demands that are often unrealistic.

An example is a Tenant that became very angry with us when we replaced their broken hot water heater. They wanted us to also upgrade it from 40 gallons to 50 gallons. We pointed out we weren’t required to do that and even offered to split the cost difference with them. They refused our offer and wrote all kinds of nasty emails to us and accused us of being slumlords.

On the other hand, we’ve had great Tenants that we’ve waived charging them for something we had every right to do so for. When we do this, we make sure we make the Tenant aware that we are doing them this favor as a reward for their great behavior.

In closing, Landlords should be sure their standard lease template contains provisions to cover these types of situations and consistently tweak their lease template as they encounter new issues.