Not everyone who posts a Pay Rent or Quit notice actually has the rights to do so! 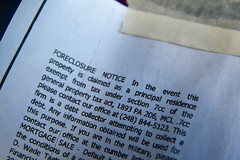 The following is a nearly-entirely true story. None of the tenant’s suffering has been exaggerated in the least — but details have been made extremely vague to protect the innocent.

Royal Rose Properties was hired several months ago to take over a building. We discovered that, contrary to what the owner had told us, there was a tenant living there. The owner had no idea! We asked the owner what they wanted to do, and we were told, “if she’ll sign a lease and pay the rent, do it!”

So we approached this middle-aged lady with a lease, and told her we were the new managers for the building. She told us, highly paraphrased, that we were liars and she wasn’t paying us a dime. So we came back with proof, and she complained to us that she had already paid rent to two other property managers.

That’s right — in the time between the last tenant moving out and our taking control of the building, someone had figured out how to get in, decided to play the part of landlord, moved this lady in, and then started collecting rent. And somehow, two other people had managed to wedge themselves into this scam, resulting in this poor lady paying rent twice that month. Because, of course, all three scammers had hit her with (completely fake) eviction notices.

Meanwhile, the building’s real owner had wisely shut off the utilities after the last tenant had moved out…but the scammers not only “hotwired” the electric connection, but also hacked the water shutoff, so the tenant couldn’t tell. We have no idea if she ever tried to pay utility bills, or she was told that they were part of her rent. But eventually, the city got wise and dug up the water main valve to shut down the illegal use.

So now this lady has no water, she’s still confused about who to pay rent to, and now the owner is livid because he has to pay a significant sum to get the city to come out and reconnect the water.

And because when it rains, it pours, she proceeded to fall down the stairs and break her hip.

So how did it all pan out? Honestly, we don’t know, because we’re still in the middle of it all, trying to find a solution that doesn’t involve piling more misfortune on the head of this long-suffering woman but also satisfies the owner’s need to see this property become anything other than a massive liability.

The point of this little vignette is simple: no matter whether you are an owner, an applicant, or a property manager, it pays to recognize that scam artists can find ways to break any system open and exploit it for cheap-if-risky money. And unfortunately, no matter how generous you want to be to the people you work with, there will always be the proverbial sucker-of-the-minute who will quietly comply with the most absurd, unreasonable demands if it means they can keep a roof over their heads. It might be more common in Detroit than elsewhere, but we guarantee it’s happening where you live. Just pray you don’t stumble into the position of being one who has to clean up the mess.

One thought on “Beware the Fake Property Managers and Building Owners”